gallery of original ASCII-art works by llizard aka ejm

This photo was taken on October 5th 1997 at the Chateau de Biron.

In 1995, when we got our first computer, before I understood anything at all about hexadecimal numbers, my sister and I regaled ourselves by seeing what would happen when we used entirely non-standard colours on an HTML page. The following is the body tag we used.

Not surprisingly, the page will NOT be rendered “correctly” here. WordPress does not like “tomfoolery” as a background colour… I had to cheat and use a real hexadecimal number for the background.

I decided to play this HTML colour game that my sister thought of.

But it isn’t a good idea to USE these colours because they aren’t hexadecimal and they won’t work everywhere. In fact, they probably only work here in Netscape if you’re running Windows95!

What a beautiful colour! (On my machine it is, anyway.) It is called “#LLIZARD”. And this colour is called “#BBUNNY”. I just randomly put names into the colour slots. This colour is called “#VKSBEST”. T will be so relieved that he has a colour other than black. !!!!!! I am still trying to blunder my way onto a yellow or white with an “#0SC11WEE”. This sister would be quite pleased with her colour. How disappointing for my sister that her name makes such an awful colour. And this is lovely and quite pleasing for the sister it’s named for. My niece would like that her name turns pink. My mother would be quite happy with this colour.

“#PANCAKES” are one of my favourite breakfasts. We decided not to use “#OATMEAL” in the batter. oooooo (How ironic that “#CRANBERRY” is correct.) But we thought that this would be a good addition to the pancakes. We thought that “#PECANS” would also be good in the pancakes. With plenty of “#MAPLESYRUP”. And of course we’ll have #COFFEE too. (I certainly hope that it doesn’t turn out to be the same colour as “#COFFEE”!) With plenty of “#CREAM”. (The background colour for this page is appropriately named #TOMFOOLERY)

Here is a screenshot that I took of the page when it was on the previous server: 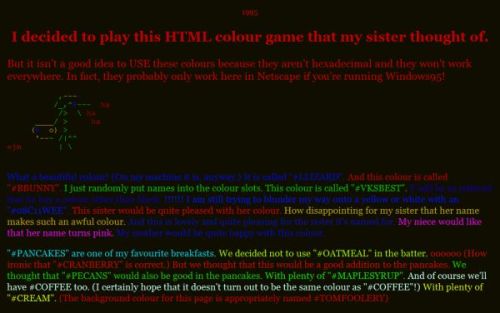 To llizards
to javascript animation of a birthday llizard

To Christmas ASCII art
To my ascii-art index